From SQL to Spark

My table looks like below. Each territory has some bricks and each brick has some sales and target amount.

So, first question is which territory has the highest number of bricks?

It’s a simple group by/count problem in SQL. But pySpark is quite simple as well.

Second question is, which Territory has the highest target attainment? Here, we have to calculate sum of sales and sum of target for each territory and then divide sales by target to find out attainment percentage. Again, pySpark has some simple solution:

Finally, we will try to make a flat structured table a hierarchical one. Let’s see the input table. 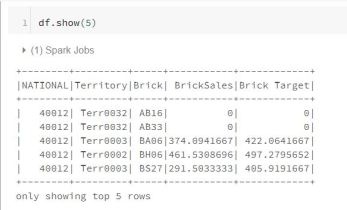 We have a hierarchy here; National->Territory->Brick. We will now make this table a classic hierarchical parent-child table. So, our expected table will be like this:

To solve this problem, we will create two dataframes and then make a union of them.

This site uses Akismet to reduce spam. Learn how your comment data is processed.